History of the ‘Galway Blazers’

The world renowned Galway ‘Blazers’ whose history traces back to the 1700s now offer special packages to come and hunt for a week or long weekend or indeed a single day (which will only whet your appetite). For more information please visitor our Visitors Page. 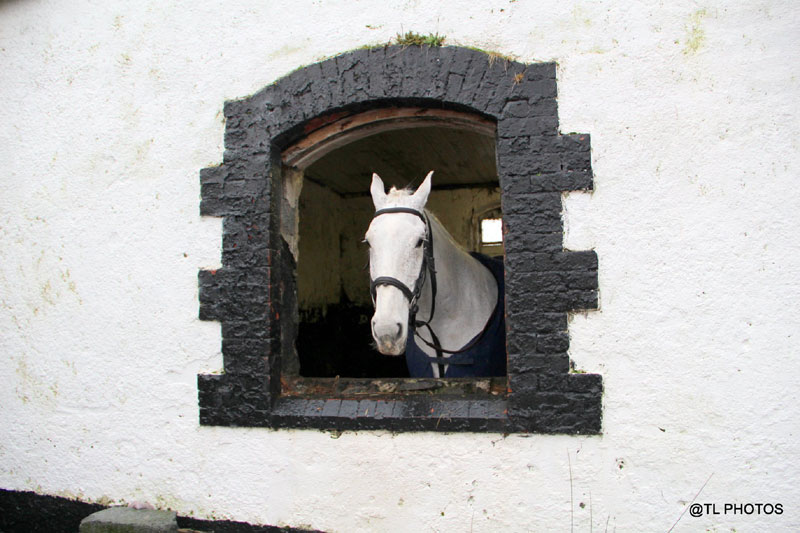 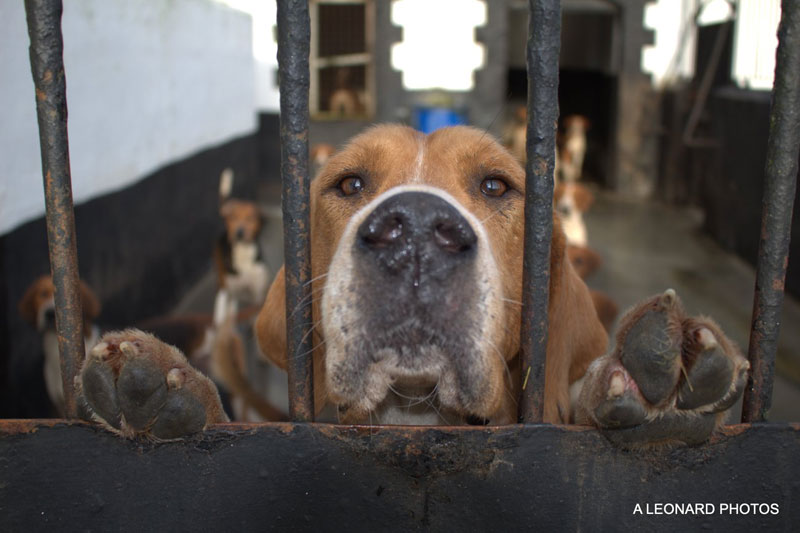 The origins of the County Galway Hunt The beginnings of the County Galway Hunt (The Blazers) can be traced back to the late 1700s. Up to the end of the 18th Century there were no formal Hunt Clubs as we know them today, many large landowners would keep a pack of Hounds of one sort or another to hunt in a private capacity. In the early 1800’s there was a move towards a more formal style of hunting which led to the formation of subscription packs, the forerunners of the packs we see today. The best known private pack in the West of Ireland was that of Mr.Burton Persee, of Persee Lodge (later Moyode Castle), near Craughwell, Co. Galway which he formed in 1770. In 1803 he made a gift of most of the pack to his nephew, Robert Parsons Persse of Castleboy, Kilchreest near the town of Loughrea, Co. Galway retaining a small private pack at Moyode which he continued to Hunt up until his death in 1836 at the age of 85 years. The gift to Mr. Persse led to the formation of a small Hunt Club called the Castleboy Hunt Club (1803). The Master and Huntsman was Mr. Robert Persee of Castleboy,, near Castledaly. This Hunt Club continued until the death of Robert Peresse in1829, this Club was the genesis of ‘The County Galway Hunt’ (The Blazers). At this time there was another pack being hunted by Colonel Eyre of Eyrecourt, Co. Galway. There was a standing invitation once a year for the Castleby Hunt to travel to Hunt jointly with the Eyrecourt pack in their Country. It is reputed that following one of these meets there were exuberant post Hunt celebrations in Dooley’s Hotel , Birr, Offally which resulted in the Hotel being set alight, hence the revelers were christened ‘The Blazers’ and the name has stuck ever since. Robert Persse died shortly after this and the Hunt Club was disbanded for a period. Revival of The Blazers On the 25th of March 1839 Sir.M.Bellew became chairman of a committee of eleven with Thomas Reddington as Hon.Secretary and Robert Bodkin as Hon. Treasurer. In July of that year John Denis of Carraroe was appointed Master and Huntsman. 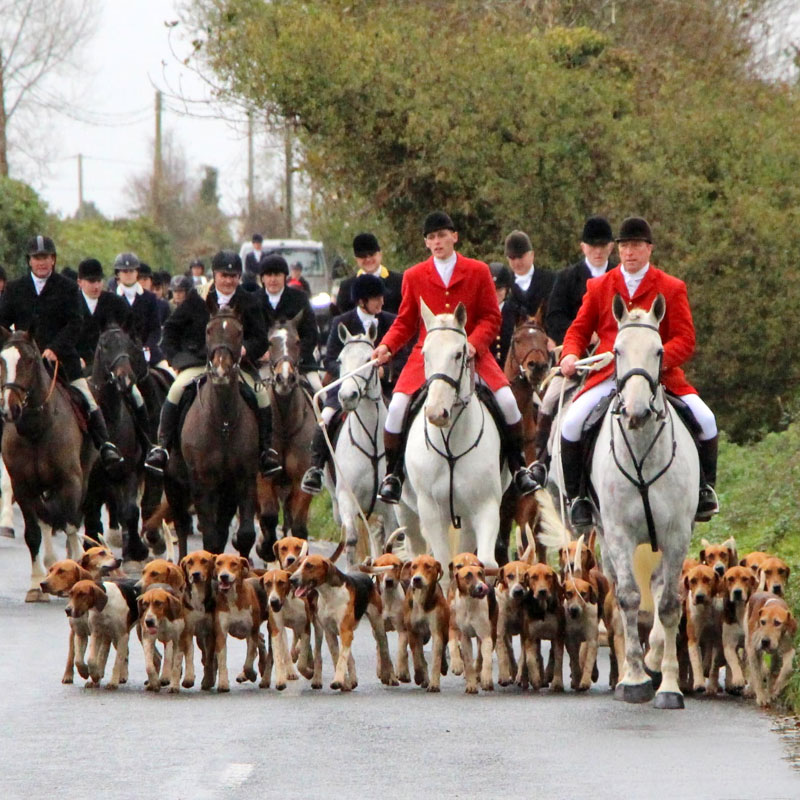 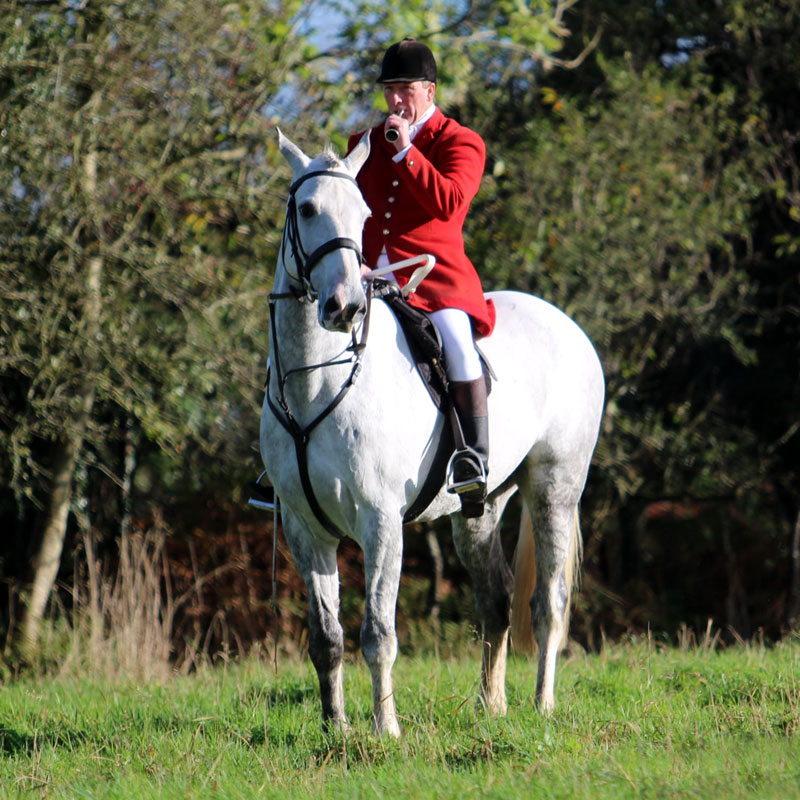 On the 4th September 1839, with Mr.Pierce Joyce in the chair, John Denis was instructed to source Hounds to purchase for the Hunt. The search ended in the Ormond Country with the purchase of fifteen couple at a price of five guineas per couple. The following year, further purchases were made, consisting of draft hounds from the Kilkenny Hunt, and by March 1840 there were thirty couple of hounds at Kennels near Dunsandle (roughly located between the village or Cruaghwell and town or Athenry, Co. Galway). It was at this time that the club was formally named ‘The County Galway Hunt’ John Denis hunted the hounds for eleven seasons, he retired in 1850 to Bermingham House, Tuam, which he had inherited from an uncle.

The Mastership of the hounds passed to Burton Persee of Moyode Castle, near Craughwell. His prowess as a Huntsman crossed the Irish Sea and in 1881 he was invited by the Duke of Beaufort to stay at Badminton and hunt his hounds. The extent of the country over which Burton hunted in Galway was enormous, from Gort in the South to the Borders of Mayo in the North and Portumna in the East to the shores of Galway Bay. The death of Burton Persse in 1885 confronted the Blazer followers with a situation – what was to happen to the Hunt ?

During his tenure the Hounds were kenneled at Moyode, not only were they without a Master and Huntsman but they were also without hounds or a kennel. In 1885 at a meeting in Mack’s Hotel in Galway it was decided to purchase the hounds in the kennel at Moyode. The Hunt committee purchased twenty three couple of entered hounds and eleven couple of puppies for the sum of three hundred and seventy five pounds. Temporary kennels were arranged for them at Castle Lambert House. The following September Mr.T.W. Anderson from County Waterford took over the Mastership of the Hunt. After the death of Burton Persee in 1885, the Blazers experienced a period of changes in Mastership up to the year 1890, when the Lord Clanmorris who lived at Creggclare, Ardrahan took over. He was Master from 1890-1895, and in addition to providing a high standard of sport in collaboration with his Huntsman, Jack Press, he built the existing kennels and Ballymore House at Craughwell, Co. Galway. 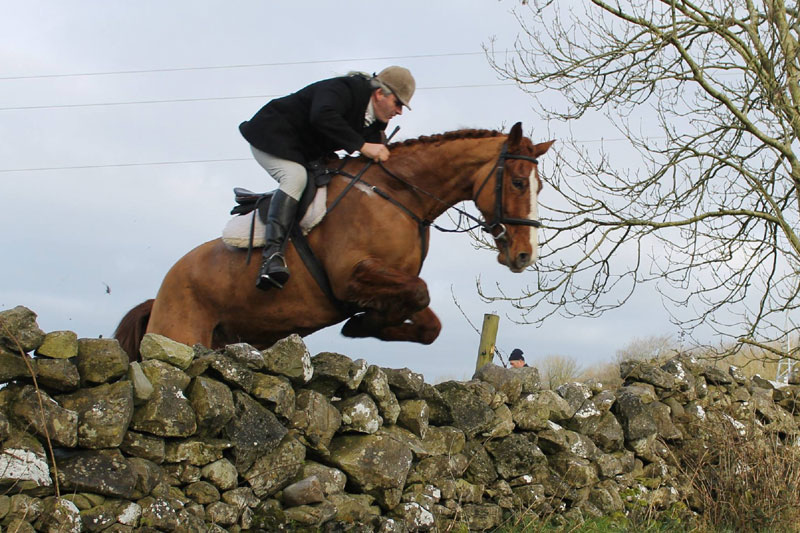 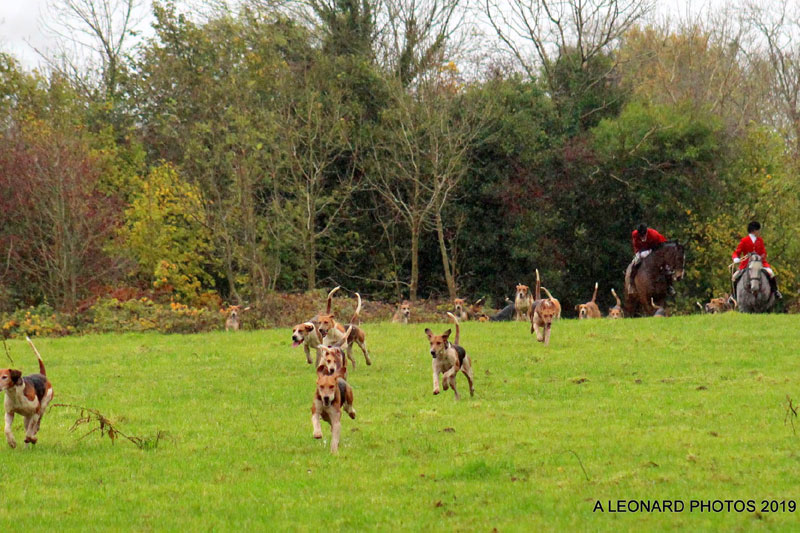 When Lord Clanmorris gave up the Mastership there followed a lapse in continuity including the years 1897-1899, when for the first time in their history to date the Blazers were without a Master and were run by a committee. Then Mr.Fred Poyser from England took over until 1903, and was joined for one season by Mr.Harry Withworth. A New Century The first Master and Huntsman to be appointed in the new century was Mr. Ikey Bell. He was a young American who moved to England at an early age, he had been Whip to a pack of Draghounds at Cambridge. Mr. Bell was to become one of the most renowned Masters and breeders of Hounds in the 20th Century. He was Master and Huntsman of The Blazers between 1903 – 1908, on leaving Galway he took over the Matstership of the Kilkenny Hounds. With several short Masterships intervening, Mr.Joseph Pickersgill took over the Mastership in 1911 coming from Yorkshire where his father had been a very successful bookmaker . He inherited his fortune, ‘so long as he never went on a racecourse’ to the benefit of hunting in Ireland. He was joined for the first two seasons by Mr.W. Burdon, and then he carried on alone for eleven years. The Blazers enjoyed this period under a gifted Master whom some said ‘could hunt a fox himself on a bad scenting day’, and whose innumerable falls had not dented his nerve one bit. When Mr.Pickersgill gave up the Mastership in 1922, there followed some short tenures until 1922, when Major Bowes Daly of Dunsandle took over, and held it either singly or jointly for twelve seasons. The Dalys were one of the old families of Galway: his ancestor, Lord Dunsandle, had been Speaker in Grattans Parliament. Mr Daly’s immaculately kept diaries give a comprehensive record of this period. The country was hunted three days a week with fields of between 20-30 people. This Mastership brought a high standard of organization to the coverts and breeding earths. When the Second World War started the Major and his joint Master had to forsake the plains of Connacht for the horrors of War. The War Years Miss Molly O’Rourke (Lady Cusack Smith) of Bermingham House Tuam and Mr.Patrick (Paddy) Pickersgill kept the hounds going during this time. Miss O’Rourke took over the Mastership in 1939 and hunted the hounds herself until 1943, when they were taken up by Mr.Pickersgill until 1945. Mrs.Trundle, who later married Major Bowes Daly, hunted the hounds from 1945-46 and then she and Major Daly for the seasons 1946-1948. A friend of Major Daly’s in the person of Major Profumo took over the Mastership jointly with Robert Peel in 1948, and remained until 1952, when Mr.Lance Smith followed him as Master and Huntsman until 1955, to be followed in turn for one season by Mrs.Johnstone and Mrs.J.Smith of Cooliney. The Modern Era Mr. Paddy Pickersgill returned to the Mastership in 1956, and continued in office jointly with Lord Hemphill until 1960, and then with Mr.John Huston (renowned file Director) until 1963, when they were joined by Mr. Frank Manheim until 1966. 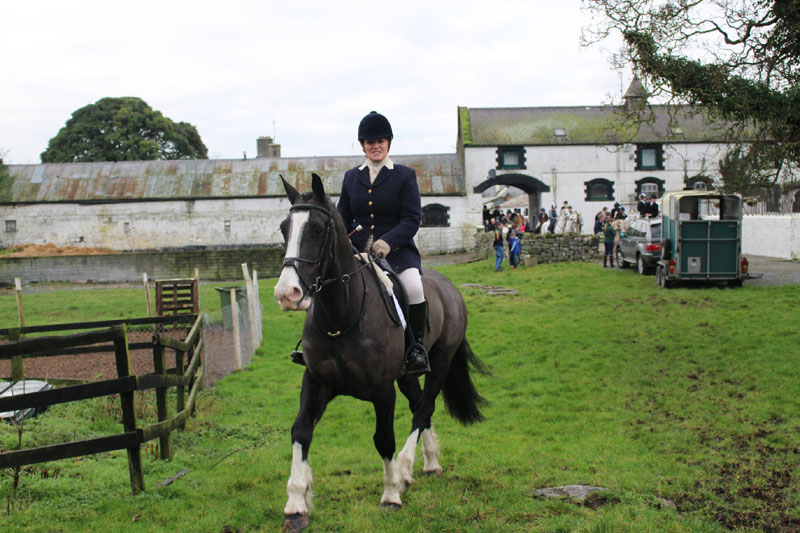 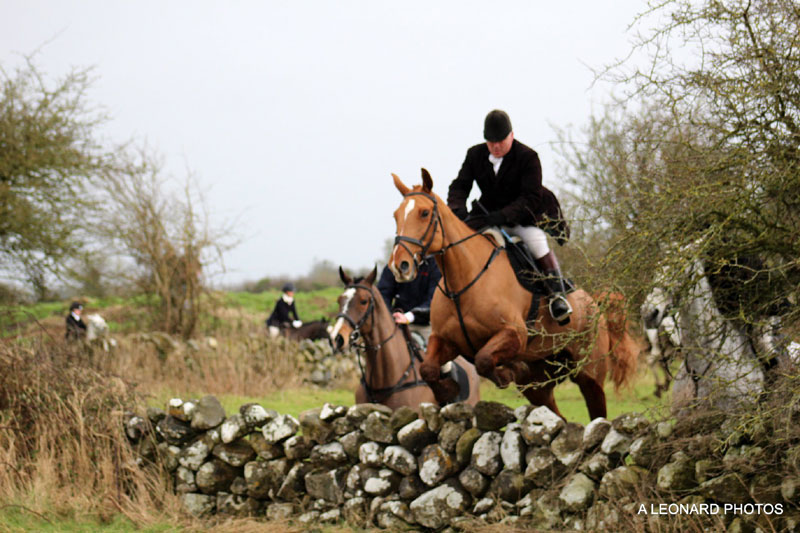 During Paddy Pickersgill’s second Mastership the Blazers had one of the best ever hunts recorded in their history. It took place in December 1961 from the Meet at Crumlin Bridge. It went from Larabeg southward in the direction of Bellville turning westward towards Mount Browne and on to Cartymore. They continued on crossing the Galway-Monivea Road and the Athenry-Moor Park Road. They continued West touching the edge of Leonard’s Wood and finished at Lisheenkyle.

In 1957 Lord Hempill of Tulira joined the Mastership. For the next 30 years Lord Hempill and his family were to play a major role in the affairs of the Hunt, Lord Hempill as senior Joint Master and Field Master: in the latter position, he was followed by his wife Anne, who became one of the most distinguished Field Masters in Ireland. Paddy Pickersgill and his Joint Masters retired in 1966 and the Blazers found themselves without a Master. Major Profumo one of the former Masters took over the Mastership even though it involved travelling from his home in Waterford to Galway to hunt.

After Major Profumo’s retirement in 1969, the Mastership was taken over by Captain Brian Fanshaw, Mr.John. Huston and Mr.Frank Manheim. Captain Fanshaw had been Master and Huntsman of the Warwickshire hounds for several seasons prior to his arrival in Galway. He and Mr. Frank Meinheim were joined by Mr.Bishop for the seasons 1971-1972. Captain Brian Fanshaw has been described as a talented horseman and handler of hounds. In 1972 the Mastership was taken over jointly by Lord Hempill, Mr.Frank Manheim and Mr.Jack Mahony, and they were joined by Mr.Joe McGowan in 1974.

In 1978 Mr.Michael Dempsey, a Galway man, became Master and huntsman. This was to be another era of continuity and good sport with hounds hunted by a man whose ambition it had always been to hunt the Blazers ever since as a 13 year old boy on his pony he followed Major Bowes Daly. He had whipped-in to Lady Cusack-Smith and Mick Carnell, then hunted the East Galway for five seasons before joining Lord Hempilll and Mr.Eamonn Walsh in 1978.